A Woman with a Disabling Spirit

10 Now he was teaching in one of the synagogues on the Sabbath. 11 And behold, there was a woman who had had a disabling spirit for eighteen years. She was bent over and could not fully straighten herself. 12 When Jesus saw her, he called her over and said to her, “Woman, you are freed from your disability.” 13 And he laid his hands on her, and immediately she was made straight, and she glorified God. 14 But the ruler of the synagogue, indignant because Jesus had healed on the Sabbath, said to the people, “There are six days in which work ought to be done. Come on those days and be healed, and not on the Sabbath day.” 15 Then the Lord answered him,“You hypocrites! Does not each of you on the Sabbath untie his ox or his donkey from the manger and lead it away to water it? 16 And ought not this woman, a daughter of Abraham whom Satan bound for eighteen years, be loosed from this bond on the Sabbath day?” 17 As he said these things, all his adversaries were put to shame, and all the people rejoiced at all the glorious things that were done by him.

Today is the 12th anniversary of the attacks of 9/11.  In the recent passages we've been seeing that catastrophes happen to the "good" and the "bad" but the fact is there is no truly good person, no truly innocent person.  We are all living, utterly and completely, by the grace of God alone.  And we are living on borrowed time at that.  God is patient and merciful, wanting as many people as possible to come to a saving knowledge of Him before He returns, this time in judgement. We know that through everything that happens, God is sovereign.  And we see that again, in our passage today.


There are two things that I love about this passage.  First, is the fact that Jesus initiates this encounter.  Jesus chooses her.  He chooses to heal her, out of all the people in the crowd.  It says nothing about her faith - either before or after the healing (though I'm hopeful she became a believer!).  God is sovereign, and here Jesus demonstrates His sovereignty by choosing to heal this woman.

Second, is the fact that Jesus touches her in order to heal her.  He didn't have to touch her.  I love that He did.  We serve a personal, compassionate, and tender God.

We also serve a holy God, who calls out people on their hypocrisy, as evidenced by Jesus' dealings with the synagogue ruler.

We see two completely different sides of Jesus in this story.  Driscoll remarks on this....

Jesus is both tender and tough.

What a hardened heart that man must've had to be so indifferent to this woman's suffering that he would virtually ignore the miracle and try to stir the crowd against Jesus by making up yet another rule about the Sabbath.  They wouldn't have had any rules against healing on the Sabbath because people couldn't heal each other!  He just made one up.  Rules about the rules about the rules.  That's legalism.  That's hardness of heart. And Jesus calls them on it.  They can untie their animals and lead them to water, but they can't allow a human being made in the image of God to be healed?!  Really?!  You treat your livestock better than people?!   Yeah, time to be tough with that guy!

MacArthur makes a great point at the end of his sermon....


This woman is symbolic of the saving work of the Lord. She.... should be unforgettable in the memory of every believer, because she's such a wonderful analogy.
The Lord passes by the religious and self-righteous, passes by those that say and think they're good, passes by the religious leaders, and the Lord chooses the lowest of the low. One who would have been deemed to have been a sinner of some massive proportions to have suffered such a fate. He ignores the proud and He chooses the humble. The Lord sovereignly chooses. The Lord sovereignly delivers. The Lord sovereignly straightens up the one who is bent over. The Lord sovereignly produces praise.
This woman then is a picture of the sovereign work of the Lord in salvation, a picture of the enslaved, oppressed sinner under the burden and bondage of Satan, hiding in the shadows aware every moment of suffering the wait and the burden of sin hopeless, robbed of dignity, bent over like an animal. The image of God defaced. So is the picture of the sinner shuffling one day into the presence of God to hear the word of God. She is met by the Lord and He out of His sovereign love delivers her, straightens her up and makes her a true worshiper. This is the picture of the work of God in salvation. God offers salvation to the outcast, the humbled, those bent over by the weight of sin, who will come and hear Him and He will turn them into true worshipers and He bypasses the curious and the self-righteous. 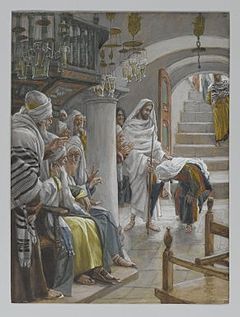