"O Jerusalem, Jerusalem, the city that kills the prophets and stones those sent to her! How often I wanted to gather your children together, just as a hen gathers her brood under her wings, and you would not have it! Behold, your house is left to you desolate; and I say to you, you will not see Me until the time comes when you say, ‘Blessed is He who comes in the name of the Lord!’"

Ha, John MacArthur has no less than FIVE sermons on these two verses.  FIVE!  I did listen to three of them, but only briefly skimmed the other two.  They were all very interesting in and of their own rights, but in a way they weren't really talking about THIS passage.  This was the jumping off point, but the main focus of all five sermons was God's promise-keeping faithfulness to Israel as a nation.  I found the last one particularly interesting because he gets more deeply into the differences between "covenant" and dispensationalist theologies.

The quick run-down is this: Dispensationalists believe Israel is still God's chosen nation and they will one day return to Him as a nation, and be the light to the world He planned for them to be.  The Church ~ the "Gentiles" ~ is grafted in through God's grace and receives the same spiritual blessings promised to all God's people, while the physical blessings promised are still for Israel as a real, literal nation at some point in the future yet to come.  Those adhering to covenant theology, on the other hand, believe The Church has replaced the Jews as God's chosen people.  Israel no longer figures into God's plan as a nation.  Believing, or Messianic, Jews are simply considered part of The Church and receive their blessing and the fulfilled promises as members of The Body of Christ.

Now this passage breaks down into three sections: compassion, condemnation, and conversion.  We see initially Jesus' broken heart over His people who've rejected Him and are about to scream for His crucifixion.  He condemns them for their rejection of those who've been sent by God ~ the judges, the prophets, their Messiah ~ to guide them, to warn them, to call them to repentance.  In response, effectively what He says here then is that He is going to leave them.  This is not talking about His death on the cross and the fact that He won't physically be on earth anymore after His resurrection and ascension.  He's saying God is actually withdrawing, removing Himself from them as a nation.  He is leaving them to their own devices.  They are on. their. own.

And this one solitary, beautiful word is where the importance of covenant vs. dispensationalist theology comes into play.  Jesus says He won't be with them anymore UNTIL the day comes when the Jews, His Chosen people recognize, accept, and worship Him as their Messiah.  That one word ~ "UNTIL" ~ is proof that day will come.  He didn't say "unless," which would indicate certain conditions must be met first.  No, He says "until."    There will be conversion in the hearts of His people.  And when that happens, when they return to Him, He will return to them.

The key in all this, I think, is to remember the Abrahamic covenant and the Davidic covenant were not conditional promises God made to His people.  These two sets of promises were not dependent upon Israel's performance.  Yes, there are many times in the Old Testament where God promised blessing and prosperity to the nation if they kept His commandments and death and destruction if they didn't, but God's promises to Abram and David regarding the future of the people contain no such conditional language. When God made His promises to Abram, He did not enter into a traditional covenant contract together with Abram (the walking-between-the-halves-of-slaughtered-animals ritual), but rather, He made Abram a witness as He made this covenant with Himself.

I believe there is a future for Israel as a nation.  A future that includes a nation-wide revival, a turning back to the God of their forefathers, a revelation of Christ as their Messiah.  I believe it, not because John MacArthur believes it, or even because I personally believe the Bible gives that indication in numerous places in the Old and New Testament. 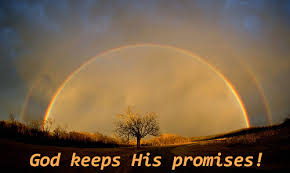 I believe it because I believe God keeps His promises.

If He doesn't, there's really no point in Christianity.

The first time I remember hearing the explanation of the ceremony with the animals split in half was on a Ray Vanderlaan session/lesson. He explained that the lesser of the two parties would be the one that would have to walk between the dead animals symbolizing what would happen to him if he didn't live up to his end of the bargain. And when God "walked" between the two dead animals, He was promising to die when Abraham couldn't keep his end of the covenant.

Here is the explanation I was able to find online that explains it fully....
Gen. 15:7-20 Traditionally in the ancient near east, marriage was not merely the joining of two persons, but two families. When the two families entered into the pact, a goat's throat would be slit open, making a pool of blood. The father of the bride and the father of the groom would take off their sandals, walk through the pool of blood, and shake hands. In doing this, they were effectively saying "if I (or my son or daughter) breaks this covenant, may this happen to me and more also" (i.e. may my blood be spilled as this goat's).1

YHWH commands Abraham "Bring me a heifer three years old, a female goat three years old, a ram three years old, a turtledove, and a young pigeon." Abraham cuts the animals in half and forms a blood trail of his own accord--YHWH did not specifically command this. Abraham already knows what to do--the blood trail is already an established ANE practice.2 Abraham also knows that he will have to walk through the blood trail to seal the covenant. And what does YHWH require of Abraham "but to fear YHWH, to walk in ALL his ways, to love him, to serve YHWH with ALL your heart and with ALL your soul" (Deut. 10:12). And "whoever keeps the whole law but fails in one point has become accountable for all of it" (James 2:10) and all who break even one point of the law are under YHWH's curse (Gal. 3:10). Essentially, Abraham understands that if he walks through that blood trail, it is suicide. If HE does not break YHWH's law, one of his descendants WILL, and the sure destruction of Abraham's line and his covenant will soon follow.

And then we just had a sermon preached on this exact thing this past Sunday where our pastor explained it again.

What an incredible picture of God's faithfulness in spite of our faithlessness.

Very interesting perspective. I love the insight in that last paragraph, but the middle part I'm not sure I quite agree with. How would Abram have known what God would expect of him at this point? The Abrahamic covenant is actually the second time God promises the land of Canaan to Abraham's offspring and there's never been any indication of what Abraham may or may not be required to do. God hasn't ever specifically said He must be loved with all one's heart, soul, and mind and that His commandments must be kept. He hasn't given any commandments yet. So I'm not sure I'm convinced Abram would have known there was absolutely no way he could ever hold up his end of the bargain if God made a covenant with him.

However, I certainly believe God knew it, and that's why the last paragraph makes perfect sense. It really is quite beautiful.

Genesis 17 does talk about this, and v2 seems to indicate the covenant included this expectation. The OT isn't as concerned with chronology as we westerners would like, that's for sure!

I asked about it on the RVL Facebook group and got this reply from one of the other group members.....

It's difficult thinking about how Easterners wrote, coming at the Bible from a completely Western mindset. As far as the Gen. 17 coming before or after Gen. 15... I personally just take it as, God is confirming something that was already agreed upon between him and Abraham. Its just that we didn't get to read about that conversation. But its not just Gen. 17 that confirms that Abraham's obligation was to be perfect. Its the whole Bible that confrims this like Kiersten said. For example, the sacrifices made in the temple were at 9 and 3 O'clock to remind God of his covenant with Abraham, to die for his lack of ability to be blameless. And then Jesus was hung on the cross at 9 and died at 3 confirming that Abraham was obligated to be blameless and failed and Jesus who was blameless for Abraham completed the Gen. 15 covenant the second that he died (I may have these times wrong (?) but the concept is right). Also in Gen. 15 it says Abraham "fell into a thick and dreadful darkness" (paraphrasing). This is like saying he was "scared to death". But why? It was because he knew he couldn't fulfill his end of the covenant (by being blameless) and would have to die for it. That's when God prevented him from walking through the blood and went through it twice himself.

I think we'd all know that we could never hold up our end of a covenant with God, no matter how minor the stipulations were!

That definitely makes sense. Thanks for looking into that for me!

Have you ever listened to his lectures? I think you'd love them. There in the sidebar of this blog under "Follow the Rabbi"

Someone showed a few of the videos in our church a while back for pulpit supply. Greg and I were both very impressed.