Today's passage from the Bible In a Year Reading Plan is Colossians 2, Proverbs 9, Isaiah 19-20
Today's scripture focus is Luke 13:1-5

When I first read this passage the first thing that I thought of was that it is human nature to compare ourselves with others. We compare what we look like with others. We compare what we wear, what our abilities are, and what we have accomplished. Unfortunately, we also compare our Christian walk with others as well and not always in a good way. While it might be good to compare our Christian walk with others who are inspiring us to grow closer to God or to become more faithful in our devotions or prayer time, often our comparisons are less admirable. We tend to compare ourselves in a "oh well at least I don't do that" or a "can't believe they are calling themselves a Christian when they can't seem to let a sinful area of their lives go" or a "I'm a better example than them" way. The reality is that none of that matters because we are all the same. 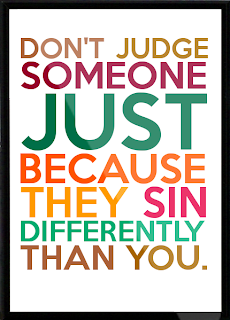 Now this is not to say that in a community of believers that you should not confront a person in a loving and corrective manner, but it is not our place to judge and condemn a person based on what we perceive as sin. Some sin displays more prominently in a person's life than other sin but is no less damaging.

When I searched up the MacArthur sermon that accompanies today's passage, he had a different interpretation of today's scripture. MacArthur suggests that:

Well the Jews had a theology about it. They did. Their theology was, of course, that they were superior to everyone. They were the people of the Covenant and they had a very highly developed theology that they were the favorites of God. And that God blessed them and protected them and kept calamity from them. And, in fact, if calamity did fall, it was a good indication that God was judging you in particular because although you may have been a part of a people that were generally under the blessing of God, you must be very evil and very bad at heart because God is going to bring calamity to fall upon those people who are evil. That was sort of the prevailing conventional wisdom theology of Israel. This goes way back. This goes way back to the patriarchal period. We're talking the time of Abraham, Isaac, Jacob period. We're talking about the time of Job who lived in the patriarchal period. Job, you remember, had calamity, right? All of his children were killed. Horrible, they were all killed and they were killed while they were worshiping God. They were massacred, his whole family. And then he lost all his crops. And then he lost all his animals. And then he lost his health. And his friends came around to explain what the reason was for this. They were going to give him the theology of his own 9-11. "Eliphaz says, 'Remember now, whoever perished being innocent?'" When were the upright ever destroyed, Job? You must be a really wicked person. You're hiding it. That's what he said. And he was relentless, you know. Four chapters later he's still at it. And many chapters later he's still at it. You come in to chapter 22, he's still at it. He says in verse 4, "Is it because of your reverence that He reproves you?" mocking him. "Is it because of your reverence that He enters into judgment against you? No, is not your wickedness great and your iniquities without end." That was the conventional theology.
If you have calamitous events in your life this is the judgment of God on you because you are a bad person.

Therefore, the Jews believed that all of the catastrophic events in a person's life were, in fact, a direct result of a person's bad behaviour. Is that what we think too? We are surrounded, daily, by images and newspaper reports and radio news that ooze with all the gory details of the latest catastrophes. It is hard to ignore them and it is hard shield ourselves from the effects of seeing this haunting images.

And the truth is, if we weren't living in this particular era of human history, we would not experience all of this. We would live in a little world somewhere and that little world would have its share of disasters and sometimes pretty devastating ones. But we at least wouldn't have to bear the weight of all the disasters of all the world all the time. There is no little world for us anymore, not in western society. The weight of the tragedies of the world finds its way on our emotional backs. The tragedies of the globe becomes ours to process in our beleaguered minds. And if it's not enough to have to deal with all the real disasters, our society is very adept at creating artificial ones and putting them on the screen so we can be emotionally hammered by things that don't really happen to go along with the things that do. We wind up, to some degree, being initially outraged, but we end up numb. We bear the knowledge of every disaster. We bear the disaster of every catastrophe and every calamity at a level that never has been experienced by generations in the past. And the media that we're exposed to are filled with images of chilling deaths endlessly. The level of this all, I suppose, may make us think that there are more calamities in the world than ever in any other era of history. And certainly it is true we have more technological killing power than we have ever had, but we seem to be holding it off. We do have greater killing power than the world has ever known in the past. But the truth is, the calamities aren't any worse or any more frequent. In fact, there have always been natural disasters and for the most part they...they do more damage in more primitive societies as we see in Third World countries and would have done more damage, of course, then in past history when we didn't have the safeguards we have today in construction and protection. And certainly diseases did more damage in the past. Plagues would wipe out whole countries. There's always been calamity in the world, cataclysm, disaster, always catapulting unexpected people into eternity.

Always catapulting unexpected people into eternity. Into eternity. That's the reality. One day we will all face the end of our lives--whether it be from accident or sickness or old age--we will all reach the end. The events that surround the reason that ultimately ends our time on earth don't really matter. It doesn't matter if we sin more, longer, or harder than those around us. It doesn't even matter if our lifestyle does cause a greater degree of hardship on our lives or if we have done "nothing" to "deserve it". The truth is that we have all sinned and that is what separates us from God.

But it's really not physical death He's talking about. We have to assume that the Galileans there offering sacrifices were probably not believers in Jesus. We have to assume the eighteen people crushed by the towers were not believers in Jesus and they perished. And Jesus says, "Look, don't assume anything. You're going to likewise perish," likewise not by the same means but with the same certainty. Everybody's headed for death. And the point is, you better repent before you get there. You better settle your case before you get to court. Just because Pilate's soldiers ran by you to get to those Galileans, says nothing about your righteousness. Just because the tower fell and you had just left with your water doesn't mean you're more righteous than the ones who were crushed. Just because your plane landed and somebody's crashed doesn't mean you're any better than anybody else. What it does mean is God is showing you more mercy, more patience, giving you more opportunity to repent....
...Now what do you mean repent? Two things. With this we'll draw a conclusion. Two things in repentance. One, change your mind about your sinfulness. Change your mind about your sinfulness. Most people think they're pretty good. Most people would say, "Well, when I get to the judgment seat and I face God, yeah, I think my good outweighs my bad." Boy, that is a damning attitude. You better change your mind. You better acknowledge the absolute holiness of the Law of God, its binding obligation. You better acknowledge that if you've ever broken one of God's Laws one time, you're headed for hell. You are a violator of the Law of God. You are a debtor to God. The word culprit is the word debtor. You are a debtor in the deepest sense, not only is your conduct bad, your...your words bad, your thoughts bad, but your heart is corrupt. You must accept personal guilt and the expectation of judgment by God as a just judgment on you as a guilty sinner. You deserve punishment. That's the thing we're talking about when you say change your attitude about your sinfulness. Repentance is the sinner agreeing with the righteous condemnation of the Law. It's the sinner agreeing that not only his conduct but his heart is evil and rebellious and contrary to God and His Law. And inherent in that admission is the confession that the sinner has no power to change it, no power within himself to rescue himself by moral duties, by ceremony, or by some kind of conduct. So repentance is simply agreeing with God's diagnosis of your wretchedness and understanding that you can do absolutely nothing about it....
...And back to our text. The Lord says, "Look, if you don't repent, a kind of repentance that embraces full trust in Jesus Christ as the only one who can rescue you from your sin, you will all likewise perish," apollumi, be destroyed, lost. He's not just talking about physical death here. He's saying you will end up at God's court sentenced to eternal judgment. Jesus says, "How do you understand calamities? Is it just the bad people that get killed?" No. No. It could be anybody. It could be you. And the lesson is, you better repent or when it does come, you're going to perish. And it will come, maybe in a calamity.

This is exactly the reason I get uncomfortable when I hear the phrase, "...all those innocent people" in relation to some catastrophic event, either natural or man-made. NONE of us humans are innocent. We ALL fall short of the glory of God and deserve the full punishment for our sins. The only reason all of us haven't been wiped out is God's amazing grace. The spectacular-ness (good or bad) isn't really in the horrific event that took the lives of a group of people ~ it's in the fact that it didn't happen sooner. To me. To you. To everyone.

So true Pamela and Tammi. There is no such thing as innocent people. And catastrophes should be a reminder to us that we're all living on borrowed time by the grace of God. If we got what we deserved we'd all be dead. God has incredible amounts of patience and mercy - but it will eventually come to an end - whether by our death or by His return.