“Be dressed ready for service and keep your lamps burning, like servants waiting for their master to return from a wedding banquet, so that when he comes and knocks they can immediately open the door for him. It will be good for those servants whose master finds them watching when he comes. Truly I tell you, he will dress himself to serve, will have them recline at the table and will come and wait on them. It will be good for those servants whose master finds them ready, even if he comes in the middle of the night or toward daybreak. But understand this: If the owner of the house had known at what hour the thief was coming, he would not have let his house be broken into. You also must be ready, because the Son of Man will come at an hour when you do not expect him.”

Christians the world over and throughout the centuries ~ ever since Jesus promised to return ~ have lived with the expectation that His return is imminent, the next thing in the sequence of end-time events.  And they're right to have done so.  We're right to continue living that way.  We don't know when He'll return, but we do know with certainty the Second Coming is much sooner now than it was 2000 years ago.

Here, Jesus reminds His followers to live in readiness, and He gives four analogies ~ clothes, lamps, servants, and thieves.  He tells them to:
I particularly love the third analogy, not only because it's the clearest, but because it gives us a glimpse of the glory to come.  Look at v.37 again.  Look at the reward He promises.  Not only will we receive recognition as faithful servants (if we've carried on in His absence, always prepared and preparing for His return), but He Himself will serve us!  He will sit us down and prepare a meal for us to enjoy!!  Normally, that would be the servants' job, but true to His nature here on earth, Jesus reveals that even in Heaven, He will serve the meal.  Just as He washed the disciples' feet at the Last Supper, just as He fed them breakfast on the beach after His resurrection, He is even now preparing a feast ~ the Marriage Supper of the Lamb ~ and will serve His faithful followers one day. 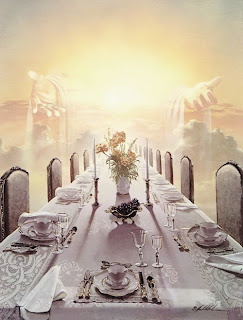 What a banquet that will be!  And what great encouragement to continue on, to persevere, when it feels like He isn't returning any time soon and evil is winning at every turn.

Take heart!  He will return.  He will reward His faithful servants.  All we need to do is live in readiness for that great day.

Great summary of the 4 analogies! I love the 3rd one as well for the exact same reason.