And they were all amazed at the greatness of God.

But while everyone was marveling at all that He was doing, He said to His disciples, "Let these words sink into your ears; for the Son of Man is going to be delivered into the hands of men.” But they did not understand this statement, and it was concealed from them so that they would not perceive it; and they were afraid to ask Him about this statement.

Today's passage seems to be a bit of general wrap-up for what has previously been talked about in this chapter.  Luke's told us briefly about the missions trips the disciples were dispersed to pursue, the feeding of the 15-20-ish thousand people, the amazing and glorious transfiguration three disciples were privileged to witness, and then a dramatic exorcism the very next day.  Naturally, they marveled at the greatness of God.

They knew Jesus was God.  They knew He was the promised Messiah.  And by this time He'd become so wildly popular that this was likely His highest point on the public opinion polls.  It would rapidly decline after this because His words would become increasingly more blunt.  To this point Jesus had been performing wonderful, spectacular miracles and winning people with what they interpreted as the promise of a perfect welfare state ~ no hunger, no disease, no demons (no Romans) ~ but His words had been veiled, His teaching in the form of parables. After this point, with only about six months remaining in His earthly life and ministry, His message is going to become a lot less palatable.

But right now, the disciples especially, are reveling in the euphoria of a Messiah who appears to be following their idea of how the Messiah was supposed to present Himself.  Signs, wonders, a great Teacher with a growing following... one can easily see how they would assume overthrowing the Roman government and freeing the Jews to live in their utopic, promised kingdom would shortly follow.

Now Jesus has told them a few times already that He will suffer and die, but they've somewhat disregarded that statement.  It doesn't fit the picture in their minds, and so maybe they just dismiss it, figuring it's just another one of Jesus' parable-like teachings.  Or maybe it was like what still happens so often in our minds and from our pulpits today ~ we just skim or gloss over the things we don't understand or don't really want to purse, understand, and agree with.  We still tend to prefer believing in a God who makes us feel comfortable, who fits OUR vision of who He should be and what He should do.  We tend, even as Christians, toward man-centeredness.

But here Jesus stresses a little more the importance of what He's trying to tell them.  There's a new urgency:  "Let it sink into your ears," He says.  Pay attention.  Absorb it.  "I am going to be handed over to evil, sinful men and they will kill me."  (This is apparently the literal meaning of the Greek words used in the original manuscripts.)  And yet, once again, the disciples don't really get it.

But this time, the indication in the text is that it was concealed from them, hidden from their understanding.  An act of God which, MacArthur points out, is really an act of mercy.  If they had understood it plainly all of a sudden, if they had been able to see the future, say, 6 months to a year down the road, would they really have stuck around for the last six months of their training?  Not likely.  Most bolted after Jesus' arrest, but when they reunited, the power of the Holy Spirit finally opened their eyes and they understood and believed why and how Jesus was still the Messiah even though He'd been crucified and the Romans were still firmly in control.  If they had been able to see the future at this point, they would have bolted immediately, because in their minds, He was still there to lead a great uprising to overthrow the Romans.  And they still had six crucial months of education left.

It really is a gracious act of mercy that we don't know the future.  Can you imagine having nothing to anticipate, nothing to gain from the experiences we go through?  As MacArthur says, "There's nothing really very new [in this passage].  But it just provides for us a wonderful, wonderful summation of some of the very core astonishing realities about Christ. Everything about Him is beyond human explanation. Everything about Him is startling and astonishing and shocking and amazing." 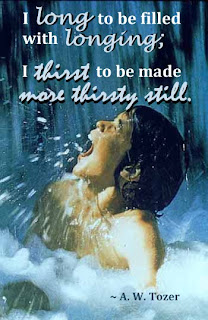 Let everything about Him fill US with wonder.  May we resist the urge to turn Him into something of OUR making.

Let us forever be riveted on every detail about Jesus Christ as revealed in His Word, so that we steadfastly remain Christ-centered despite the sea of man-centeredness we live in.

May He truly become the sole purpose of all Christian living.

What a great wrap up it is and full of things I hadn't considered before. Like the point about it being concealed from them at this point - so true that they likely wouldn't have stuck it out for the remainder of Jesus' ministry if they could foretell the future. A gracious act of mercy indeed - for them, and for us. It's hard enough to live for eternity when we can't see what's coming in the temporal, nevermind if we could. We'd become too wrapped up in the here and now, unable to marvel at Jesus for who He is, and not who we try to make Him. It's not about us. It's not about me. It's about Him.