And a man named Joseph, who was a member of the Council, a good and righteous man (he had not consented to their plan and action), a man from Arimathea, a city of the Jews, who was waiting for the kingdom of God; this man went to Pilate and asked for the body of Jesus. And he took it down and wrapped it in a linen cloth, and laid Him in a tomb cut into the rock, where no one had ever lain. It was the preparation day, and the Sabbath was about to begin. Now the women who had come with Him out of Galilee followed, and saw the tomb and how His body was laid. Then they returned and prepared spices and perfumes.

And on the Sabbath they rested according to the commandment.

Not surprisingly, I don't really have any of my own thoughts on this passage.
Even less surprisingly, John MacArthur has many, most of which I've never considered before!  :)

I think of the many "new" things about this passage in his message, the one that stands out most for me is his illustration of how "the divine, pre-planned, prophesied, and powerfully executed features of the burial of the body of Jesus provide for us some very strong evidence for some very important realities:  the divine purpose of history, the sovereignty of God in all things, the authenticity of Scripture, and the veracity of the claims about the Christ."  That's pretty huge!

It's pretty phenomenal, really, how Joseph of Arimathea fits in here.  It's incredible enough that he ~ a member of the Jewish ruling elite, the Sanhedrin, the 71-member Supreme Court as it were (including the High Priest) ~ was obviously a follower of Christ.  He had been a secret follower until now, but now he screws up his courage and asks Pilate for the body of his King.

A cross-reference of all four Gospels places this event immediately after the rest of the Council has asked for the breaking of the legs of the crucified criminals.  They want these guys to hurry up and die already.  They desperately need those bodies removed before the Passover High Sabbath day begins.  We'd hate to defile our traditional celebration with their dead bodies hanging there.  It's fine to kill the Messiah on the Passover; but His body hanging there still on the High Sabbath will soil their pristine religiosity.  Such incredible blindness.

Anyway, they are leaving Pilate's presence virtually at the same time Joseph is entering.  Perhaps he was actually with the group and just stayed back to talk privately with Pilate.  We don't know.  But we can infer that he could remain no longer a "closet Christian" after this.

Now any common crucified criminal would carelessly be thrown in a burial pit once death was confirmed.  And this would have happened to Jesus as well.  Isaiah 53, the chapter that prophesies how the Messiah will die to save His people, says in the opening line of verse 9: "His grave was assigned with wicked men..."  Jesus was seemingly destined for the mass grave outside the city.

But a wealthy secret believer reveals himself and offers an unused burial tomb, fitting for a king.  The second half of that phrase in Isa. 53:9 says, "...yet he was with a rich man in his death."  Joseph, a virtual unknown on the pages of Scripture, fulfills this prophecy, hundreds of years old.  And though Luke's Gospel doesn't mention it, Nicodemus ~ whom we've met before yet for all intents and purposes has remained a secret follower as well ~ joins him there.  Together, the two wealthy Jewish leaders carefully wash all the sweat, the caked-on dust, and the dry blood from Jesus' battered body and gently, reverently wrap it for burial.

It isn't Jesus' close followers or even His family who ask for His body and bury it.  It is two unknown believers.  While all Jesus' known disciples and followers fled and hid for fear of suffering the same fate as their Master, Teacher, Brother, Son, and only followed at a safe distance to see where He'd be laid to rest, quickly sneaking in a few spices and lotions of their own just before the sun set and the Sabbath began... these two unknowns come forward to not only do what needed to be done, but to fulfill the Word of God. 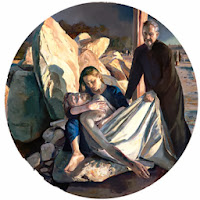 What an incredible glimpse of God's providence ~ that mind-blowing, on-going, moment-by-moment miracle that allows God to weave together any and all thoughts and actions the world over to fulfill His purpose and tell HIS story.

Love this, thanks Tammi.