When they led Him away, they seized a man, Simon of Cyrene, coming in from the country, and placed on him the cross to carry behind Jesus.

And following Him was a large crowd of the people, and of women who were mourning and lamenting Him. But Jesus turning to them said, “Daughters of Jerusalem, stop weeping for Me, but weep for yourselves and for your children. For behold, the days are coming when they will say, ‘Blessed are the barren, and the wombs that never bore, and the breasts that never nursed.’ Then they will begin to say to the mountains, ‘Fall on us,’ and to the hills, ‘Cover us.’ For if they do these things when the tree is green, what will happen when it is dry?”
Two others also, who were criminals, were being led away to be put to death with Him.

When they came to the place called The Skull, there they crucified Him and the criminals, one on the right and the other on the left.


We meet four groups of people on Jesus' way to Golgotha, according to John MacArthur.  We meet the people who hate Him ~ the "mixed murderers," the Jewish religious leaders, the Romans.  They are the "they's" in the first sentence:  "...they led Him away, they seized a man..."  They are either murderous in their hearts or in their actions.  Or both.

We meet the curious and somewhat indifferent "large crowd of the people" ~ those who've heard of Jesus, but never really listened to Him or been affected by His ministry.  They're following along, but aren't really involved in the unfolding drama; they're basically just spectators who needed something to do that morning and clearly, here was something pretty big going on.

Then we have the paid mourners, who were likely compassionate, sympathetic women, some of whom were likely truly grieving the impending death of a Man they knew to be great.  Undoubtedly, there were men who would have fallen into this camp, too ~ men who recognized His unmatched power and knew He was different from the prophets of old and the religious leaders of the present day.  Their culture would have prevented them from mourning openly, however, but these women were very obviously expressing grief for Jesus' sake.  They knew there was something unique about Him.  They recognized His incredible wisdom, understanding, and His supernatural power.  Some might have believed He would be their new political leader and deliver them from Roman rule.  But they weren't true followers. And Jesus tells them, don't weep for me; weep for yourselves because a day is coming when you will wish you'd never been born.

Interestingly, all three of these categories are on equal ground as far as God is concerned.  The pity of an unbeliever is no better than the hatred of another.  They are both still unbelievers and will be judged accordingly.

But then we meet the committed few.  Here we meet two of them ~ Simon the Jew from North Africa, and the one criminal who was crucified with Christ and asked to be remembered in the next life.  There is one more that we know of for sure: the Roman centurion who acknowledged Jesus' Lordship as He committed His spirit into His Father's hands and breathed His last human breath.  But from this passage, we can't really recognize them as the faithful few, because none of them have become true followers of Christ yet.  We only know from further along in the account or other books of the Bible.  I enjoy how MacArthur follows Simon the Cyrene's story and his miraculous inclusion in the birth of the early Church:


Here’s a stranger plucked out of nowhere to help Jesus carry the cross. We are unfamiliar with him, he’s unfamiliar with Jesus, but believe me, he goes all the way to the cross and nobody having done that and arrived at the cross would leave. And so he experiences the full reality of the crucifixion. And somewhere in the process he follows the story until he embraces the gospel of the Christ whose cross he carried. And his wife becomes a believer and for sure his sons become believers and are known to the church. And one of them, Rufus, becomes an outstanding choice servant of the Lord. And this family becomes critical to the unfolding of the Kingdom so that they actually have a ministry in the life of the Apostle Paul and Simon’s wife is like a mother to him. (You can read or hear all the details and references here as MacArthur traces this path through the New Testament) 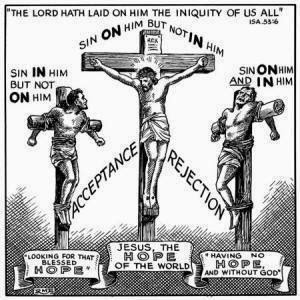 Ultimately, this passages forces us to examine which group we belong to, and the two thieves and their crosses on either side of Jesus summarize our choices very succinctly: we are either for Him or we're against Him, regardless of which of the four sub-categories we might fall under.

So true that pity, indifference, and hatred are all in the same category. So many people don't see that. Well, I'm not against Jesus, I just don't believe it myself.
Another layer of blindness.

Either for or against, there is no middle ground.