And He also told this parable to some people who trusted in themselves that they were righteous, and viewed others with contempt: “Two men went up into the temple to pray, one a Pharisee and the other a tax collector. The Pharisee stood and was praying this to himself: ‘God, I thank You that I am not like other people: swindlers, unjust, adulterers, or even like this tax collector. I fast twice a week; I pay tithes of all that I get.’ But the tax collector, standing some distance away, was even unwilling to lift up his eyes to heaven, but was beating his breast, saying, ‘God, be merciful to me, the sinner!’ I tell you, this man went to his house justified rather than the other; for everyone who exalts himself will be humbled, but he who humbles himself will be exalted.”


MacArthur says in his first sermon:

"As is true of so many of our Lord's story, they are counterintuitive. But not just counterintuitive, really outrageous, shameful by all existing religious standards. And this is one that fits into the category of an outrageous and shameful story for in this story Jesus describes the unrighteous man as the one who was right with God and the righteous man as the one who was not. This is the reverse of everything the Jews believed, everything their religion at the time of our Lord taught them, it is a shameful story, it is an outrageous story, it is an idea that has no place in their theology. It is another reason to reject Jesus. To say that a self-confessed wicked man left the temple ground justified rather than a self-confessed righteous man is to completely overturn religious thinking. But that's exactly what Jesus said."

Since 17:20 Jesus has been talking about the Kingdom of Heaven ~ who gets in, and how they can get in.  And his audience knew it was a matter of being right with God, but the age-old question (expressed already in Job's story) is how can a man be right with God??  And yet right here, Jesus says one man ~ the one everyone would have seen as loathsome, unrighteous, and hideously sinful ~ went home JUSTIFIED.  Guiltless before God!

So God, in this story, accepts the hated tax-collector and rejects the jot-and-tittle-of-the-Law-abiding Pharisee.  A classic example of Jesus' words about the first being last, and the last being first.

It's interesting ~ MacArthur points out in his second sermon ~ that both these men would have believed basically all the same things about God and about salvation/justification.  So what is it about these men that gives them standings so completely opposite in the eyes of man and in the eyes of God?  It's brokenness.  One had it; one didn't.

It is always tempting to fall into the trap of listing our accomplishments when we're trying to think what it means to be a Christian.  Certainly, there should be ample evidence of our salvation and of a growing relationship with God all our lives, but we should never forget that those are not the things that get us into the Kingdom of Heaven in the first place. 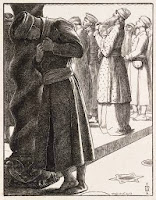 We are there because of the atoning power of Christ's blood.  That, and only that, has paid our way.

I really loved Chandler's sermon on this passage. He pointed out that there was nothing wrong with the Pharisee's prayer. It was actually theocentric. He was off by himself, not grandstanding or praying loud enough for everyone to hear him. He was also thanking GOD, not himself. And what he was thanking him for is really the same as us being thankful - that there but by the grace of God, go we. We are, and should be, thankful that God intervened in our lives so that we haven't sunk to the level of depravity that we could have.

And that's a dangerous trap any of us can fall into. Even though we became Christians by recognizing that Christ alone can justify us, as we get freedom from some of our past sins, we can begin to rely on our acts of holiness, instead of the continuing grace of God.