Now the Pharisees, who were lovers of money, were listening to all these things and were scoffing at Him. And He said to them, “You are those who justify yourselves in the sight of men, but God knows your hearts; for that which is highly esteemed among men is detestable in the sight of God.

“The Law and the Prophets were proclaimed until John; since that time the gospel of the kingdom of God has been preached, and everyone is forcing his way into it. But it is easier for heaven and earth to pass away than for one stroke of a letter of the Law to fail.

In his third sermon on these verses, I really appreciate how clearly MacArthur defines the characteristics of false religion using this passage.  He says these verses indicate "false religionists":
And of course, this is still very accurate in our day and age.  False religion hasn't changed.  There may be more false religions out there now than there were in Jesus' day, but the things that make them false still fit into these same eight categories Jesus addresses here, talking to the Pharisees.

Also, according to what MacArthur says, the word "forcing," (v16) in this case, seems to maybe be a bit of an unfortunate translation.  Obviously, no one can FORCE their way into the Kingdom of God!  Apparently the original word here refers more to how difficult it is for sinners to enter, and the struggle to repent and turn from sinful ways in order to do so.  It's linked to the "dying to self" idea.  This is not an easy thing!  It requires forcefulness on our part.  So Jesus is saying to the Pharisees here that sinners all over the place ~ prostitutes, tax collectors, etc. ~ are struggling with their sin, doing the hard work of repentance, and entering the Kingdom, but you Pharisees and all your self-righteousness, you can't even come close.

Mostly, I think the passage is fairly straight-forward, message-wise.  Jesus has been telling a few stories pointing out the hypocrisy of the Pharisees, but here, He pretty much comes right out and tells it like it is.  Most curious, I found, is the last sentence, which doesn't really seem related to the rest of the chapter.

Of course, Mr. MacArthur explains it actually fits very well, citing this as one of the Pharisees' favourite Old Testament Laws to twist, misinterpret, and abuse.  Jesus has just finished telling them the Law will stand ~ the promises and morality of God ~ beyond the end of human history, and now He says for ones who claim to be so careful to uphold ALL the Laws so fastidiously, their disregard for the heart of God behind the Law is pretty obvious in how they handle something like divorce and adultery.

They had decided a man could divorce his wife for pretty much any old reason (including burning meals or accidentally exposing her knees in public if she happened to be spinning yarn outside the house... for REAL!  This is apparently spelled out in rabbinic writings from the last century B.C.!!) and Jesus points out once again that they've completely missed the boat and what the Law was for.  MacArthur also does a really good job of reminding us biblically of the seriousness of adultery and the provision of divorce as a measure of God's grace, not His sanction. 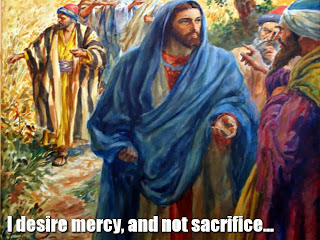 For myself, I think this study illustrated again to me the importance of knowing Scripture and even more importantly, understanding God's heart behind His Laws and Commandments.

Loved how he wrapped it all up neatly in that 3rd sermon.

Knowing His Word and knowing His heart - so important!

As, too, is knowing OUR heart, the motives behind our actions.