Then He said to them, “How is it that they say the Christ is David’s son?  For David himself says in the book of Psalms,

‘The Lord said to my Lord,
“Sit at My right hand,
Until I make Your enemies a footstool for Your feet.”’

Therefore David calls Him ‘Lord,’ and how is He his son?”

I think the thing I found most interesting about MacArthur's sermon on this passage is that the Pharisees didn't have a problem with Jesus being the Messiah.  They couldn't refute the reality that He had superior knowledge and understanding.  They couldn't argue His power over injury, disease, demons, and even death.  He was undoubtedly qualified to fill that role.  The could understandably foresee His political future and His ability to rule the world from Jerusalem.  They had no problem with the man, Jesus, claiming to be their Messiah.  They had a problem with Him claiming to be God.

You see, they were expecting the Messiah to be a man.  Yes, he would be gifted spiritually, physically, politically, supernaturally, etc., but he would still be a mere mortal.  They could not or would not grasp and embrace the concept of their promised Messiah being the same God who had chosen them through Abram, who had delivered them from Egypt ~ whom they claimed to worship.  They simply couldn't conceive or believe their long-awaited Messiah was actually God come down, living among them, preaching and teaching in human form.

Here, just a couple of days before His crucifixion, Jesus tries one last time to prove, using the Scriptures of the Old Testament, that the Messiah HAD to be both God and man.

Everyone knew the Messiah would come from David's lineage and the phrase "Son of David" was universally understood to mean this promised Deliverer.  So Jesus recites a passage where David clearly implies that his Savior-yet-to-come is in the presence of God and being addressed by God, receiving a promise of future glory.  And Jesus asks, indirectly, how can this "Lord" David mentions be just a man if He exists with God before He is even born?

This was the Pharisees' last chance to hear His voice, to acknowledge Him as the Messiah.  He didn't speak to them again after the crucifixion and resurrection.  Some Pharisees did respond and become His followers during His three-year ministry.  We don't know for certain if any more were convinced at this particular time, but apparently, the messianic nature of Psalm 110 ~ unquestioned until this point ~ suddenly became, and still is, the focus of frenzied efforts to find alternative meanings.

Even today, few have problems with Jesus being a real person, a prophet, a miracle-worker, a great teacher.  It's once we maintain His claim that He is God, that He has a right to be worshipped as Lord of our lives that the fight begins.  But following His example, let us persevere; let us continue engaging the world and proving His claim till the very end of our lives. 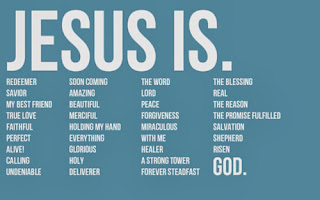 I didn't realize that they thought this way until listening to this sermon either!