"When you hear of wars and disturbances, do not be terrified; for these things must take place first, but the end does not follow immediately.”

Then He continued by saying to them, “Nation will rise against nation and kingdom against kingdom, and there will be great earthquakes, and in various places plagues and famines; and there will be terrors and great signs from heaven."

I will confess: I forgot about this post until late yesterday afternoon and just didn't have the time to spend on it like I usually do.

I am always a little conflicted by passages like this.  On the one hand, it's reassuring.  God is in control and the bad things that happen?  Part of the plan.  But on the other hand, it scares me to know that it will get worse before it gets better.  I can't help but fear for my children and grandchildren and their futures; realizing how much more depraved society will be and become over their lifetimes.  It's already deteriorated so much during my own life to this point.

And yet Jesus tells us here, "DO NOT BE TERRIFIED"!

It's hard not to be fearful when you read the newspaper or watch news on TV.  It's never good news.   Atrocities that were only in the far reaches of a few wild and twisted imaginations back when I was a child now actually happen, and with frightening regularity.  The moral fabric of our society is unraveling at lightning speed.  Reports of strange and devastating weather phenomena and natural disasters seem to be multiplying and indeed, insurance company reports testify to the reality of exponential increases in "act of God" claims over the last two decades.

How can we not fear the future?!

But we know who holds it.  He created the heavens and earth out of nothing.  He spoke, and solar systems took their places.  He breathed life into dust and mankind was born.  He healed the sick, made the lame to walk and the blind to see; He calmed the storm with just a word, and brought the dead back to life.  And that same power holds our lives secure, no matter what happens to us in this physical life. 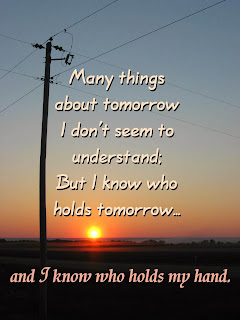 That's how we can face the future with joy instead of anxiety.  We know how the story ends, where WE will end up.  Yes, there's dreadful stuff coming first ~ and we may even experience some of it first-hand ~ but Heaven awaits, and no matter how much we suffer in this life, it amounts to nothing against eternity there.

It's so true - everything is getting worse. MacArthur had a whole list of stats on wars, plagues, famines, great signs from heaven (weather related destruction is how he saw that one) - and the numbers are staggering.

But this isn't a shock to Jesus. He foretells it right here. This is what's coming.

What jumps out at me is the "but the end does not follow immediately" part. These are all the signs of the end is coming sometime in the future, but not immediately. Basically, this is what's all going to happen in between the first and second comings. And He warns them here that the second coming will not be immediate. Little did they know how far in the future it would be, and we would still be waiting!

I guess the only thing that can cause us not to be terrified is to realize that no matter what happens to us physically, our spiritual eternity is secure, and that the horrors of this present life will (as hard as it is to imagine) pale in comparison to the glories that await. It's so hard to think with an eternal mindset though. But it's crucial in order to endure hardship.

I don't know if I agree that things are getting worse. The world is definitely bigger, more populated and the reports are more accessible, but evil is still evil. People are just as violent as they have always been. Weather patterns change and then change back, earthquakes knock down mountains and cities, floods, hurricanes, volcanoes, typhoons…all reminders that we never know what is going to happen…and maybe today is a good day to change your life and get right with God. Not sure that even the passage of time changes that longing from God's heart.